FABulous Observations: Nigeria’s one degree of separation – by Nwadiogo Quartey-Ngwube 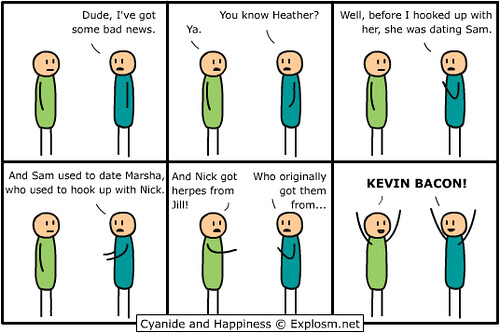 Now that in itself is already scary. Imagine that you are only a few people away from that annoying guy at the club you spent all night trying to get away from. That actually happened to me once. I met him again on campus a few days later. Turns out he wasn’t an awful person in the end…(and now we’re friends – Lol)

But this degree of separation can bring hope too. I only need to find six people for me to get to know Obama. With Obama in the UK at the moment he may be even closer than I thought. I should probably start calling people…

Here at FAB, well at least me and Sinem, we reckon that with Nigerians the degree of separation is one. That’s right ONE.

And it’s highly possible. I hardly ever go to Nigeria but man do I get gist! For all you know I have gist on you too *wink* Don’t you get that random gist about people you’ve never heard of, only to meet them later (can we say awkward?)

Why am I talking about degrees of separation today?

I was listening to BBC Radio 5 Live this morning and they were talking about injunctions and how people use them to cover up affairs, etc to protect their reputations, livelihood, the works!

I sat and laughed to myself thinking at least in England they have a chance with injunction.

Can you imagine a injunctin in Nigeria?

I can imagine the gist being so good the judge themself couldn’t help but tell a friend, who would of course already know this person personally due to our special one degree of separation. And the gist would carry on and somehow reach me here in the UK (before the week is over).

That random thought aside, from my over-active imagination, I like the fact Nigerians are so closely knit. You can feel at home without being home and when you get home it is like you never left. It just means you have to be more creative with your privacy. And with BBM making the gist travel faster and farther, I hope you have nothing to hide.

And on that note,