So I just attempted a search for Yvonne Nelson via google and guess what happens. As I type Yvonne, the first last name that pops up after Yvonne is ‘Nelson.’ So yes, this lady is obviously the most searched Yvonne in sub-Saharan Africa so her celebrity cannot be disputed.

Who is Yvonne Nelson?

Aged 27 (she will be 28 in November), it would delight some to know that she has featured in over 100 movies and being a non-ardent follower of Nolly or Gollywood movies, I sincerely have never seen a single movie she has been in even though I am certain that this lady must be very talented and why would I think so? Well, her resume is pretty impressive, see below:

-She won a singing talent competition in high school

-In 2009, she was named Joy Fm Nite with the Stars Best Actress

You see what I mean by having an impressive resume? All of the above made Yvonne a star in her native country of Ghana with a population of just over 20million people (Same population as Lagos State in Nigeria. Forget what the shady politicians said) but she was not content with that and my theory is that she knew that if she became a star in Nigeria, she stood a better chance at world domination and was she right? Of course she was! With a population and potential audience of over 160million people, Nigeria is now the target of every African celebrity, following the footsteps of multinationals who had come to this realisation ages ago. The sheer numbers make any business venture into Nigeria quite reasonable (putting it mildly).

I personally had no clue who Yvonne (who has now christened herself with a Nigerian name, Damilola) was even though I may have bumped into her whilst attending certain high profile events in Accra, Ghana but she came up on my radar when Iyanya mentioned her in his hit song, ‘Your Waist.’ He sang, ‘Yvonne Nelson I have your medicine’ and I believe this prompted ‘the question’ on a wider scale as the clubs, radio stations, music television channels across Nigeria and indeed the world fell in love with the song…Who is Yvonne Nelson?

It did not take long to find out that she had been in a ‘relationship’ with the ‘Kukere‘ crooner and before long she went public with the break-up and not long after rumours made the rounds again that she was dating another high profile artist in Nigeria, Chocolate City’s Ice Prince. Before we could say ‘Akwaaba’ Yvonne was getting major features and covers on major magazines in Nigeria and with that came a few endorsements as her fame grew.

I am guessing that at this point, preserving her celebrity has become her main obsession or how else would you describe some of her tweets about her ‘restored’ virginity; her topless photos on instagram and recent rumours of a death threat? Yes, Yvonne published on instagram what some people have considered ‘phony’ text message with details of a death threat. Find image from her instagram page and some of her fans response to the message below: 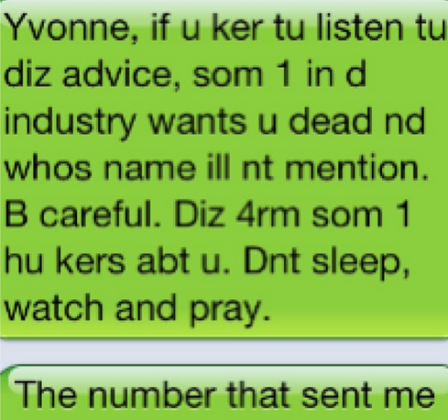 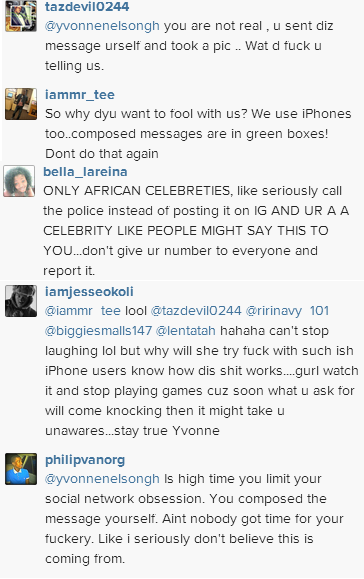 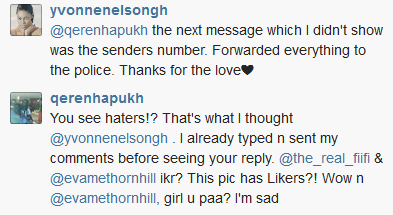 Is Yvonne simply adopting the ‘give them something to talk about’ stance, no? We love Yvonne Nelson. Ok, let me be upfront, I love Yvonne Nelson, not for her looks, not for the rumours but for the mere work she has put in and continues to put in. I personally believe she does not need controversy to thrive and stay relevant in her industry. Celebrities have come and go and the only ones who stay relevant are those whose work continue to speak, long after they have stopped talking. This is not a threat but I know Yvonne will read this and hope she takes time to meditate on these expensive words. I really, really hope she listens.