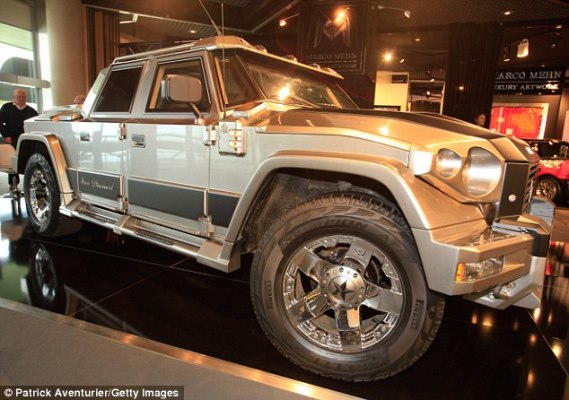 It seems Kanye West might have got some superior powers ‘pissed off’ as no other reasoning could quite justify his purchase of two units of super-armored SUVs’ for over $1Million each. According to reports, Kanye West just spent $1.2 million each for two high-performance armored vehicles to protect Kim Kardashian and their daughter, North. The Prombron Iron Diamonds by Dartz Motorz (pictured above) is said to prevent kidnapping, hijacking and ‘other problems which can meet rich people on the street’

The super-SUV is even built to withstand attacks from landmines and rocket-propelled grenades. ‘Kanye is fully aware that his new family is so high-profile they attract the attention of weirdos and psychopaths. He aims to leave nothing to chance…His priority is to get delivery of the vehicles, especially Kim’s, before he begins his US tour in October,’ a source told the Daily Star.