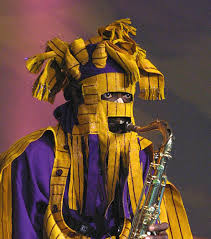 This artist has thrilled us over the years with amazing afro-infused renditions and Nigerians have come to love him so much. His outburst was in support of an article by Okey Ndibe. The question is why would he now call Nigerians fools? Read Lagbajas letter to Nigerians below and also the original piece by Okey Ndibe right after:

Dear Okey Ndibe: Thank you for sounding the alarm in a way that should make us reflect deeper. Mumu is not a condition I proudly proclaim. It was with a heavy heart that I came to this shocking realization that we are indeed a country of mumus. Harsh as it might sound, no other explanation would suffice. It is apparent that the “leaders” know that they would always get away with whatever incredible schemes they concoct because, amongst other reasons,

(a) the mumu people they “lead” are no different from their mumu “leaders” in character
(b) the mumu people are gullible, superstitious and naive
(c) there are no consequences for criminal acts if you belong to the right group
(d) these mumus never demand accountability from their “leaders”
(e) the mumus expect their rulers to loot or would otherwise consider them foolish

…All in just the past two weeks or so in mumudom.

Excuse me, I have to return to work. I need to earn £3000 for my British visa. Wait a minute, did I tell you I am still a Commonwealth citizen?
Lágbájá

Okey Ndibe’s article below
The masked phenomenon known simply as Lagbaja is one of the few Nigerian musicians whose art is inspired by the late Fela Anikulapo-Kuti. In keeping with the Felaian spirit, Lagbaja’s act and art combine prodigious, heart-thumping entertainment with a political message that, at its eloquent best, has the powerful effect of summing up the Nigerian “condition.”

Fela, for example, flung the word “zombie” in our faces. In the heydays of military rule, when our uniformed men exhibited the complex of mini, mindless gods – flinging the lash at hapless civilians or shooting at the slightest provocation – Fela’s term captured that syndrome of senseless, rampaging power. The way Fela deployed the word was deeply penetrating. “Zombie” entered Nigerians’ social lexicon, a handy word for all battered or potentially battered subjects of military despotism. The word entrenched itself as the most natural way to describe the military honchos who ruled (and ruined) us. It also described the antics of the uniformed minions who – forgetting that they were victims of misrule – seemed ever willing to keep the rest of us in line, to still voices of dissent, to serve any regime with rabid, ferocious efficiency.

Fela also gave us “ITT,” deconstructing the name of an international telecommunications corporation headed by the late Moshood Kashimawo Abiola to yield a new term: “International Thief Thief.” His song, “Beast of No Nation,” proclaimed the collective bastardry of the Nigerian society just as his “Overtake Don Overtake Overtake” (ODOO) is a shorthand for anomie.

Today, it is Lagbaja, I suggest, who has offered us the handiest name for our collective malady. In a recent song that should become as much an anthem as Fela’s “Zombie,” Lagbaja famously calls Nigerians 200 million mumu. The word mumu is a quintessentially Nigerian word, its rich inflections and negative connotations derived from its pedigree. It translates (rather prosaically) as a fool, a buffoon, a person susceptible to scams and other forms of trickery.

In the lyrics, Lagbaja names some of the big men who have shaped – that is to say, misshaped – Nigeria: Ibrahim Babangida, Sani Abacha, and Olusegun Obasanjo. But there’s an unusual, jolting twist in the song. As the listener settles to it, expecting to hear the familiar “yabis” – words of insults usually lobbed at the country’s past and present misrulers – Lagbaja turns his barbed tongue on the so-called “ordinary” Nigerian, the “followers.” In his worldview, all Nigerians are part and parcel of the fabric of corruption and oppression that the unfortunate among us bemoan.

In Chinua Achebe’s fourth novel, A Man of the People, one of the characters earns a chilly, censorious look when he teases the ill-educated, prototypically corrupt politician, Chief M.A. Nanga, with an old joke: “MA, minus opportunity.” Lagbaja uses a similar linguistic move on all of us. Nigerians, all of us, are corrupt – he seems to say – minus opportunity. At any rate, Lagbaja sees the lot us as mumu, collaborators in our own oppression and debasement, architects of our collective misfortune.

At first glance, Lagbaja’s would appear to be a harsh, excessive and even misplaced indictment. But it’s hard to deny that there’s a vital sense in which the musician is right on target. In fact, it’s impossible to undertake any retrospective of events in Nigeria without coming to the conclusion that too many Nigerians act as fertilizers for the malaise that plagues and wrecks their lives.

Let’s take some of the recent events from the past week or two.

We’ve watched – some riveted with peculiar glee – as politicians from Rivers State darted onto the stage to offer us a veritable theater of the absurd. In an act of particular impunity, four or five members of the state assembly attempted to stage a spurious impeachment of the speaker and to replace him with one of their number. Backed by powerful politicians in Abuja (including, some suggest, President Goodluck Jonathan and his wife), these legislative renegades were prepared to act on the proposition that they outnumbered 27 or so other lawmakers loyal to the speaker they sought to remove.

A physical fight ensued to settle this sordid, “political” arithmetic. In the melee, one legislator seized a make-shift mace imported by the Abuja-backed renegades and used it to batter a colleague, Michael Chinda – a member of the Abuja Collective. Numerous videos of the fracas have gone viral on youtube. In them, we see so-called lawmakers who should have been on Nigeria’s boxing team at the London Olympics. We see the police at their inefficient worst, unable to control a rowdy gathering of thuggish legislators and their hired thugs. We see one of the lawmakers ready to kill or die because the state governor, Chibuike Rotimi Amaechi, had insulted his “mother,” aka Patience Jonathan, aka (the fuming pugilist’s) “Jesus Christ on earth.”

I wrote a few weeks ago that there was no substantive principle at play in the political crisis in Rivers State – or in any location in Nigeria, for that matter. It’s all a game about who gets to steal the most from the commonwealth and who gets To Molest the people. Neither faction in the dispute is actuated by the public good. Power, the acquisition of raw power for self-aggrandizement, is the governing motivation.

If Mrs. Jonathan now functions as divinity, a “Jesus Christ on earth,” then her husband, who fancies himself a “transformational leader,” must occupy a special seat in any gathering of leaders, dwarfing such figures as Barack Obama, David Cameron, Angela Merkel, and Paul Kagame. Yet, the terribly injured Chinda could find no hospital within the precincts redeemed by Mrs. Jonathan and transformed by her husband for treatment. Instead, it was to Mr. Cameron’s Britain that the battered Chinda was flown for urgent surgery.

Here’s a safe bet: Mr. Chinda is not spending a penny of his money to pay his bills at the Bupa Cromwell Hospital in Britain. There’s a chance that the hospital demanded and received full payment before commencing treatment. At any rate, those bills will be paid with public funds, most likely provided by his sponsors in Abuja.

The arrangement makes a mumu of all of us who accept this daylight abuse of public resources. Nigerian lawmakers, state as well as national, are paid obscene sums of money. Yet, they hardly ever use the instrument of the law to address the crises that menace the lives of Nigerians – including a non-existent healthcare system. Instead, they gallivant, carouse, undertake meaningless jamborees in Nigeria and abroad, and – when it suits them – take to boxing. They hardly work, but when they fall sick, they travel to such addresses as Britain, Germany, South Africa and India where people work hard and use their brain power.

As if Chinda’s transfer to a British hospital was not wasteful enough, last week a group of his backers, including a junior minister, Nyesom Wike, flew to London to commiserate with him. The odds are excellent that the government in Abuja paid for the flight tickets and hotel accommodation of the five or so well-wishers – to say nothing of spending cash. Mr. Wike and his team must not know how ludicrous they appear to their British hosts; they have no idea how the British would use them as the butt of jokes: Here are these Africans who have too much money but not a bit of sense to do anything for themselves!

It’s an altogether awful picture. I doubt that Mr. Chinda has sponsored a single bill that improved the lives of the people of Rivers State by a jot. Instead, he lent himself as a stooge to carry out the designs of those in power in Abuja, determined to lay waste to his state. He is injured serving this despicable agenda. And then Nigerians, including the hapless people of his home state, must pay the tab for his treatment in London. A statement released by Mr. Wike’s team underscored the ridiculousness of it all. It began: “Prominent leaders of Rivers State from across political and professional divides on Saturday visited the member representing Obio/Akpor State Constituency 2 at the Bupa Cromwell Hospital in London, United Kingdom, where the legislator is recuperating from head and jaw surgeries carried out on him by medical experts in the health facility.” Then it stated that “the leaders were grateful to God for the survival of Hon. Michael Chinda despite the vicious knocks he received from the mace-wielding Majority Leader of the Rivers State House of Assembly, Mr. Chidi Lloyd.”

These parasites, shameless consumers of other people’s products and enterprise, are the kind of characters who pass for “leaders” in Nigeria. There are also figures like Ango Abdullahi, a saber rattling jingoist who insists that Nigeria’s presidency must be turned over to a “northerner” or there will be mayhem. Even though Mr. Abdullahi wears the prefix of professor, he doesn’t evince any interest in stellar leadership. It suffices for him that somebody from the so-called North – any “northerner,” however mediocre or visionless – assume the presidential office.

It all boils down to clownishness. I’m with Lagbaja: the fact that the vast majority from all parts of Nigeria permit certifiable clowns to pollute and deform our lives makes us 200 million mumu inhabiting a perfect mumudom!