After the Floyd Mayweather showdown with Manny Pacqiuao, another brand of brouhaha went down at a conference between former friends, talk show host Wendy Williams, 50 and The Real Housewives of Atlanta star NeNe Leakes, 47.

It was at the Ultimate Women’s Expo at Georgia World Congress Center Atlanta on Sunday that this Thriller erupted.

Both women were registered as keynote speakers and they also delivered addresses back-to-back. Then Wendy’s entourage realized that her dressing room was conveniently placed next to NeNe’s and all hell was let loose.

William’s husband Kevin Hunter who happens to be her manager also demanded they moved NeNe’s dressing room far from his wife’s. While they were trying to achieve that, Wendy went on stage to do a keynote address to the thousands in attendance. Her speech was on ‘Ten rules every woman should live by.‘ NeNe and Wendy used to be pals before they had a tussle over a tweet NeNe made about Reality stars and Wendy’s reaction to it by poking fun at Nene’s sitcom, this incident happened  in 2013 and their friendship ended on that note.

Meanwhile after Wendy’s keynote address, she was followed on stage by Leakes who opened by telling the audience : ‘I’m your home girl. I live my life as an open book and I’m happy I don’t need ten rules to live by!’ That sent Williams’ husband’s anger clock ticking close to red-hot O’clock!
Kevin all of a sudden pushed through the drapes and bolted into the  stage dishing expletives at the top of his vocals:  “Get her m*********ing ass off the stage. We don’t f*** with her! Wendy don’t f*** with her. Cut that b****’s mic off!!”
While he was on stage , NeNe’s friend Diana Gowins jumped in and confronted Kevin Hunter asking ‘What the hell is your problem? If you have a problem with NeNe, take it up with me!’Those two kept going at it for a long time until the event organizers called security to diffuse the situation.
While this pandemonium brewed, Wendy was busy signing her book oblivious of it all.
In his anger, Kevin asked Wendy to terminate her book signing prematurely which pissed off the crowd and they started booing him.

By the time Kevin and Wendy got through the other side of the curtains, the event organizers and security were waiting for them and four police officers escorted them off the premises and to their waiting car,’ the source disclosed.

Organizers of The Ultimate Women’s Expo had to refund 80 tickets for patrons who paid to get autographed books from Williams but couldn’t because her husband made her leave without signing them.

Nene even attested to the drama via tweet below. 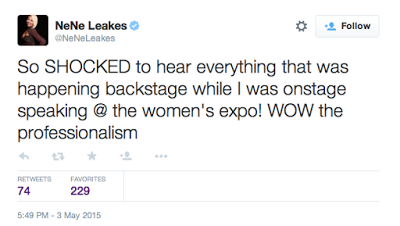 During an appearance on Bravo’s Watch What Happens Live on Sunday night, host Andy Cohen asked her did something happen with her and Williams early that day.

Leakes confirmed that the incident transpired. ‘I didn’t even see Wendy or her husband today. But a lot happened backstage with her husband, I heard. Just because I was on stage, he went completely crazy, I heard,’ she answered.

Williams and Leakes became chummy during the early seasons of Williams’ talk show because Leakes was a regular face at the show to promote Real Housewives of Atlanta.

An online fan asked Leakes, ‘what happened between you and Wendy?’ She replied: ‘That’s a good question! I have no idea.’

This whole drama just reminds me of the “Jega/Orubebe drama” that occurred during Nigeria’s presidential elections. What can one make of it.