Everyday racism is alive and well and not just in America (although American racism is highlighted a lot more).  Did you know, seventy-three percent of millennials say that “never considering” race would improve society, according to an MTV Strategic Insights survey, despite roughly 4 out of 5 also saying that embracing and celebrating cultural differences is important.

But not talking about race won’t end persistent prejudices against people of colour, and sometimes, the only way others will learn to respect cultural differences is to get a swift, tough lesson in manners. Here some of the best moments when black people did just that:

Zendaya: “Contemplate a little before opening your mouth so quickly to judge.”

“In associating Zendaya’s appearance with drug use, Rancic played into deeply entrenched stereotypes about people of color and drugs,” Mic‘s Julie Zeilinger wrote. “Though perhaps made in passing, the comment was reflective of systemic biases that impact impact the lives of people of color, and therefore, should not be taken lightly.” 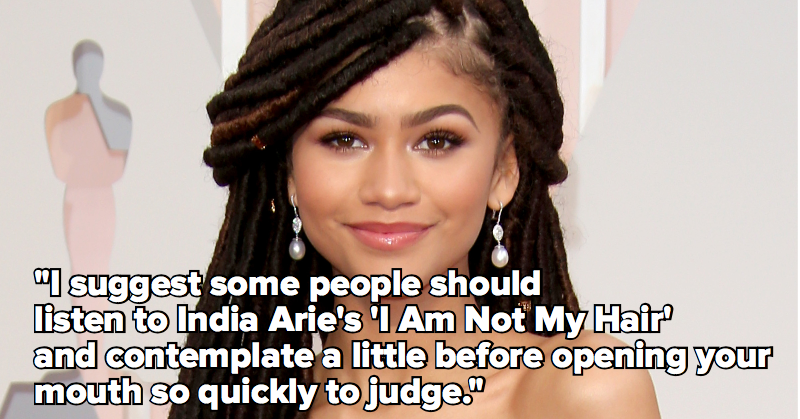 President Obama: “We do not have time for this kind of silliness.”

In a shutdown of his racist, birther conspiracy theorists, an exasperated Obama settled the debate with the ultimate receipt: He released a copy of his birth certificate. It totally wasn’t necessary, but he did it to prove a point.

With that, America’s first black president said what nearly every black person thinks when they hear racially loaded remarks — especially amid everyday struggles with racist attitudes and institutions:

Rihanna: “On behalf of my race, here are my two words for you…”

Sometimes, the racist foolishness is so vile that tact goes out the window — and rightfully so. But it doesn’t mean someone can’t cuss you out and still offer a thoughtful response. Remember when Rihanna sharply responded to a Dutch magazine that called her the “ultimate niggabitch?”

Viola Davis: “At the end of the day, you define you.”

After the New York Times‘ Alessandra Stanley characterized How To Get Away With Murder star Viola Davis as “less classically beautiful” than other lead actresses, Davis addressed that sort of subtle racism and what it’s like to be a dark-skinned black woman navigating a world dominated by Eurocentric beauty standards:

“‘Classically not beautiful’ is a fancy term of saying ugly, and denouncing you, erasing you. Now it worked when I was younger — it no longer works for me now.”

Nicki Minaj: Where was this booty outrage for the white swimsuit models?

When the rapper released the cover art for Anaconda, some people “didn’t want none” of Nicki Minaj squatting in a pink g-string. On social media, sexist and racially-charged insults were hurled her direction, many of which lambasted women of color for having curvaceous backsides.

So, Minaj cheekily posed an open question about the racial double-standards at play.

Magic Johnson: “Just go ahead … You’re fighting a battle that you can’t win.”

When audio leaked of  Los Angeles Clippers then-owner Donald Sterling’s racist comments, it wasn’t enough for him to explain his beliefs or simply take responsibility for them — he instead tried dragging down others with him. In an interview with CNN’s Anderson Cooper, Sterling painted himself as some kind of Santa Claus for “minorities,” accusing some affluent African-Americans like entrepreneur and former NBA star Magic Johnson of not being as charitable with their own kind.

Not only did Johnson set the record straight with Cooper, noting his many contributions and civic involvements, he also gave Sterling (and racists like him) a hot tip on what to do when they’re unrepentant.

Serena Williams: “In this day and age … it’s really unacceptable.”

As Vox’s Jenee Desmond-Harris notes, Williams has endured racist remarks for virtually the entire span of her tennis career. Last October, a Russian tennis official called both Williams sisters the “Williams brothers,” saying they were “frightening” to look at.

Of course, Serena didn’t back down from those remarks — and served up an ace of a takedown:

America’s favorite musical bro John Mayer really stepped in it when he described his dick as a white supremacist, but singled out two black actresses as the exceptions to the rules of his own sexual desire: Holly Robinson Peete and Kerry Washington. Somehow, he thought his degrading, sexist, racist remarks were a compliment, but Robinson Peete quickly put him in check. 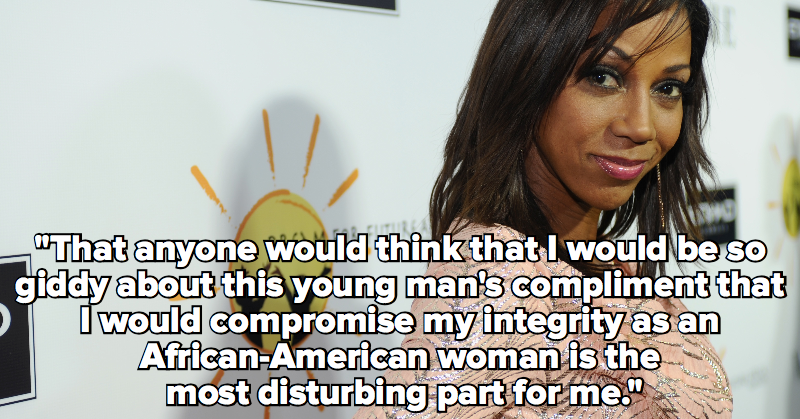 When a Los Angeles entertainment reporter asked Samuel L. Jackson about a Super Bowl commercial he’d never appeared in, the actor was visibly confused — at least until he realized the reporter had confused him with Laurence Fishburne. It’s that whole “you people all look alike” sort of statement — a racial microaggression many people of color often encounter.

After this exchange, it’s certain no one will forget the distinction:

Richard Sherman: Hockey players fight all the time, but I’m a thug for talking?

Seattle Seahawks cornerback Richard Sherman was immediately called a “thug” all over social media in the moments and days that followed his fiery interview with NFL sideline reporter Erin Andrews shortly after winning the 2014 NFC Championship.

Sherman was well aware of the racial double standard at play: Black men are labeled with racial tropes for expressing themselves, while their white counterparts often get the benefit of the doubt.